Don’t worry. Gathering the Stones is not becoming a food blog. Probably. But the longer I pastor, the more convinced I am that one of the stones that needs an awful lot of gathering is the way we eat. It is one time I thank God for foodies and hipsters. Food is ethical. It should be treated with care. Always. It’s an act of faith.

Besides the trinity, of course there are other cookbooks–Mennonite Girls Can Cook or Fix-it-and-Forget-It or all the church and community cookbooks we’ve grown. To my mind, those are saints alongside the trinity. But only the trinity is canonical. 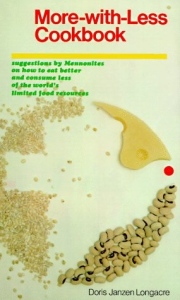 Self-portrait of Hillary c. 1995. This was my childhood.

I grew up on More with Less and potlucked out of Extending the Table, but Simply in Season is my book. It came out the same year I went to college; the year I became a vegetarian; the year I learned to cook. It was the book that raised me into a cook. In crowded college houses, we shared meals from it. In a frugal year of Americorps, I cooked lentils eight ways to Sunday, following the book. In seminary, it taught me to eat okra and other Southern foods. In the flush times, it’s inspired me to buy ground cherries or persimmons from farmers’ market stalls.

Recently I realized Simply in Season was published 10 years ago! Ten years! 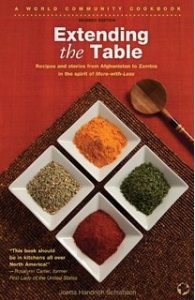 How about that Jamaican banana bread?

Because of this book, when I learned to cook, I learned to cook seasonally. I cooked from the autumn section in autumn; from spring in spring; and from summer when it’s October but there are still ripe tomatoes to be had. Over ten years, I morphed into a seasonal cycle of eating, surprised at my friends’ confusion when I spoke of garlic scapes and cross-country shipments. I can hardly remember a time when I ate strawberries in January. Not because I am noble or elitist (both of which may be true), but because the cookbook worked. Without my noticing the difference, gradually, I became more and more faithful to these principles of ethical eating. Simply in Season is not just any book, it is the story of my diet; my ethics; my community; my history; and my country. It is me, more than any other book.

The 10-year anniversary addition has even MORE recipes.

The 10 year anniversary made me nostalgic–but it also made me competitive and pragmatic. I counted up all the dishes I’d made from the 380-some recipe book. It was 20%. 20%! I was disappointed. One of the most important books in my life, and I’d only read 20% of it. And for as often as I use it, I seem to be using the same 20% over and over.

To be fair, that was about my relationship with the Bible six years ago, before I started seminary. I knew all my favorite parts, but never bothered to read it all the way through. I wanted to learn my cookbook better. I wanted to learn myself better. Given that the first three years of the cookbook I was in college living on sub-par cafeteria meal plans, I set my goal for three years. By the end of summer 2018, I want to finish cooking all the recipes in Simply in Season.

I have exceptions, of course. I’ll try to do the meat ones without meat, when possible. When it’s unavoidable, choose the options of venison or rabbit (there are recipes with rabbit!) to stay lower on the environmental chain. I might give myself a pass for some of the canning, but I do intend to make yogurt. And broccoli sandwiches. I’ll consider myself done when I’ve completed 95% of the recipes. That’s somewhere around 365 recipes, over the course of 10 years.

It’s not just my cooking challenge–it’s also my ethical and devotional challenge. As I read through the book more intentionally, I find myself reading the prayers, stories, and tips in the margins. I read meditations from other Mennonites, including ex-professors and friends of friends. I learn how to use unfamiliar vegetables; I take notes for next year’s garden. What I cook, I’ll cook in season. I’ll source as locally and sustainably as I can. No berry cakes in December–unless they’re frozen or dried.

It is an amazing thing to have a whole church cooking from the same book. It’s what keeps me Mennonite, really, knowing the canon of food that will appear at potlucks. It keeps us on the same page, not just for lunch but for how we shop and eat and invite each other into our lives. This challenge is the most holistic goal I could set for myself. I might blog about it occasionally, like this afternoon’s grape pie, because after all it is one stone that is being gathered back into the church, one cornerstone we build upon every time we sit down to eat.

When my roommate tasted the Concord grapes, she said “Maybe we should use these for Communion.” But I made a pie instead.

3 thoughts on “Simply Seasoned: Cooking through A Cookbook in Three Years”