My plan was to run up to each tree and shake it vigorously, as one would a Polaroid picture. Or, as my friend Eden said on Saturday as she passed me a film from her vintage Polaroid camera, “No! You don’t shake your Polaroid picture!”

It wasn’t a very good plan. The alternative was to use a very long stick but (1) the mere thought of it had me humming “You’re a Mean One, Mr. Grinch” and (2) required walking a mile in 90 degree weather with a very long stick. So I propped my bike against a streetlight, spread my blanket, and shook as vigorously as I could muster. Nothing happened.

I didn’t know what a mulberry was until I was 23, and for two years following that I thought a mulberry was any purple stain on on the sidewalk between June and July. But there is a single mulberry recipe in Simply in Season, I was 10 months into my effort to cook every recipe in the Mennonite cookbook, and it was my day off.

It wasn’t until this spring, visiting a family in the church, that I tried mulberries for the first time, three children eagerly pulling down the branches of the big tree to pluck them. I’d spent a month since then passing by mulberry stains on the trail near my house, wondering why no one ever stopped to glean them, how this was the second year I’d said I’d try to, and here mulberry season was practically over and I’d already started saying “next year.”

Three years of pastoring has made me cringe at the phrase “maybe next year.” The churchgoer saying it (sometimes myself) generally does mean next year, but more typically it turns into three or four years from now and next thing you know it took you three years to do a sermon series on Women in the Bible or four years to do a book study on The New Jim Crowe. So, under the principle that if God is calling you to do it in the future God endorses you doing it now, I shook the mulberry tree again. Then I climbed up the  tree, bracing myself in the “V” of its two thick trunks, and shook again, grateful that the church friend I’d invited had not yet shown up. I climbed higher, estimated the total possible damage to my body if I fell (some scratches and a broken limb, at most, and the hospital was only 4 blocks away).

I’m a fan of Pokemon Go. I don’t play it; I never played Pokemon as a kid, and it seems disingenuous to start now. But I like the principle of it, the idea that everywhere you go there may be some treasure worth finding–worth keeping–worth adding to the collection of acquaintances you keep. That your whole life is a quest to be the very best. I like the idea of small, mythical creatures hidden in plain sight, that our mutual pursuit of these creatures causes us to look at the world in new ways, to see new places not as a threat but as an invitation. It’s all very religious.

It’s also the principle of gleaning. Once you realize that food grows wild in any community lucky enough to have scruffy green places, you start to see these plants everywhere. In the Pacific Northwest, blackberries grow along the concrete barrier of any major highway. In the Midwest and the South, mulberries drop their sweet dark gold. Things grow. On their own. There’s magic in going places and just paying attention to what’s around you.

My total mulberry haul was one cup, but I did have a very nice glass of cold water with the friend.

And another friend had left her CSA mulberries in my freezer, so I still had enough for my recipe. I’ve been slogging through the Summer recipes because the season comes so slowly, so achingly slowly, as the tomatoes remain stunted and green each morning; the bean bushes nothing but flowers; the cucumber climbing, climbing three feet up but with no cucumbers in sight. All the summer recipes call for tomatoes and peppers, which won’t be ripe until nearly August. 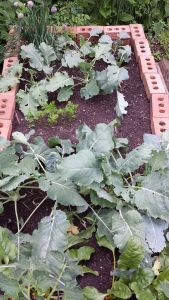 The only thing I have in abundance is golden beets and kohlrabi. There are only a handful of beet recipes in Simply in Season; all in the winter section. And there is one kohlrabi recipe. I’m mystified by how a Mennonite cookbook can have a half-dozen okra recipes (which I didn’t nearly get through in Atlanta!) but only one kohlrabi (which I only grow because of seed packets gifted to me by my Mennonite friends).

Which brings me back to Saturday night, trying not to shake Eden’s Polaroid pictures, while we watched to see what mythical creatures would materialize when the photos developed. It was just friends, laughing, exhilarated by the summer night and the back porches of Chicago. My garden is abundant, my friends are glorious, but my cookbook–my sturdy, reliable Mennonite cookbook–has no answers for this. This week, it seems so true. Black bodies are still being shot, with legal justification, and the church has no answers for this. Police are sniped dead, and the church waffles to affirm black lives and police lives without actually saying that we should have seen this coming, should have been there, should have a prayer for a moment such as this. Gun violence intersects with black lives and queer lives and the church says, “We can’t read the signs at this intersection, could you make them less inflammatory?” My white congregation, my faithful congregation, tries to speak softly, to keep their mourning in the pews, to not offend anyone with their sorrow. Tries to avoid seeing mystical creatures when they walk through familiar and unfamiliar places. And these days, it’s harder for me to defend the church.

When we speak about the church needing to catch up to the modern world, this is what it means: to remember there is no apolitical way to mourn. Our faith, if it is important, if it matters, spills over into politics, that ethics is political, that calling life sacred is a statement that requires action. To catch the church up to the modern world is to believe our faith impacts our actions. To act. To see Pokemon Go not for what it is, physically, a diversionary app just a few steps removed from CandyCrush; but for what is, socially, a revival of the hope we had in our childhood; a revival of our curiosity, of our trust that when we walk through the streets we will be safe, a hope that each of us bumbling through our own lives, if we can only articulate which mythical creature we are looking for, will find deeper and more sincere connections with each other. I understand why Pokemon Go makes more sense to my peers than church.

Be the chocolate mousse you want to see in the world.

Anyway. Last week I had extra raspberries so I made chocolate mousse, crushed the berries into a sauce and layered it between the cottony mousse. And the recipe made so much. I shared it at three different places, all my friends loved it, it was the stuff of myth. It wasn’t a Simply in Season recipe. It could have been; it has been before. And it’s what I hope the church will be, again, so startlingly relevant, so luxurious and sweet, so abundant.

Shake the church, not your Polaroids.