The carrot came out of the ground deformed. It was three-pronged, like a stubby hand digging in the dirt. And I was proud of it. I was proud of all my ugly carrots–some of them curled in on themselves, two twisted together like Siamese twins. They were mine. They were an art of their own, a created thing. 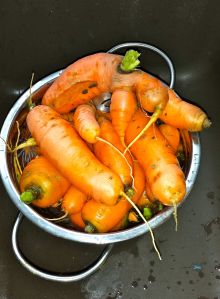 Carrots are hard to grow in Northern Illinois, and here I was in December, overflowing with orange roots that weighed nearly half a pound each! I’d dug them out, even though the first snow was two weeks ago, even though it was 35 degrees and raining. I pulled up the fruit of my lazy labor, to see if there was anything to be redeemed from benign neglect. And so I spent the evening chopping carrots, eyeballing how many was two pounds and how many I would have left and how many more recipes I needed to come up with.

Would I have bought my three-fingered carrot in the store? Doubtful. Would I have selected it from a pile of more traditional-looking carrots? Unlikely. But gardening is the practice of falling in love with what you have. And I loved my ugly carrot. I arranged it in the front of my photo so everyone would know how homegrown and awkward it was. It was so intoxicating I ran out in search of rye flour, so I could make a new experimental batch of Seeded Sour Rye Bread.

And so the story of Curried Carrot Soup was a love story.

Venison meatballs, the same. I thought venison would be the hardest to come by–how many people in the Chicago suburbs have deers just lying around in their freezers? A lot, apparently. Within a couple of weeks, I found a half dozen people in the church with venison connections, through friends or family. Soon, I had three pounds of venison in my freezer, and a mostly-vegetarian friend who, nostalgic for the tastes of his hometown, wanted to help me cook the venison.

Love comes in many flavors. Since I committed to cooking through the whole Simply in Season cookbook two months ago, I’ve added 18 recipes to my repertoire. Most of them have included ingredients from my garden. Even as the temperature drops, I still have garlic, onions, potatoes, and carrots stored away. I can pick refrigerated chives and sage just by stepping outside.

No recipe has failed me yet, although I’ve tweaked some. (Making Butternut Sage Orzo? Add some mushrooms.) And each recipe brings me back to my garden; my friends who share meals with me; or my congregation, who recommend what recipes to try next. Each recipe is tied to a relationship.

Simply in Season, over and over, brings me back to my home. To the people who make me feel at home. Once, I brought a newly-experimented broccoli salad to a congregation member, not knowing broccoli salad was one of her favorite home-tasting recipes.

The first two months of this three-year experiment are, at least, doing what I had hoped. These new recipes are a devotional, a praying with the hands, a learning with the body, an incarnation. In my three-fingered carrot, i see the image of God–it, too, is God-breathed and formed with the same artistic touch that made me a biped. Every recipe is an act of love–or of trying to love. And what with life being what it is, with so many temptations telling us not to bother with love, I treasure every moment of learning to love each bite I take.