Director/writer Jordan Peele calls his film Get Out a “social thriller,” and if you’re like me, your newsfeed has been saturated with tasteful Vaguebooking about the film. But Get Out can be described, with equal accuracy and without spoilers, as a “contemporary apocalypse.” Apocalypse has become Hollywood shorthand for the highest possible stakes of an action sequence–any film that uses the destruction of all human life as a plot device. But in the traditional sense, apocalypse represents an entirely different genre of literature.

Classical apocalypse has less to do with annihilation than regime change. The Greek word apokalypsis means revelation, or uncovering. it’s a genre of literature–much like horror. 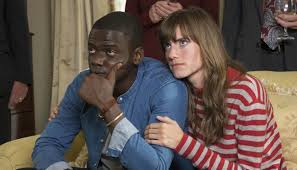 I was terrified at “meet my parents.”

Get Out is a social thriller in the sense that it uses social evil (racism) to heighten an otherwise traditional horror film. I’d be lying if I said I didn’t spend 15 minutes with my hands over my eyes (but I only see four movies a year and have a low tolerance for visual violence so don’t listen to my definition of scary). A black man accompanies his white girlfriend’s family in the suburbs (a terrifying enough premise on its own), and everything you know (and don’t know) about horror film ensues. I’m not a fan of spoilers, though, so what follows is fairly obtuse on plot details.

Get Out is apocalyptic the same way that Revelation–and other books of the Bible–are social thrillers. The plot hinges on a systemic oppression, laden with specific and symbolic details, reaching a low point and with the hope that a protagonist can interrupt the systemic oppression, regardless of personal cost or total efficacy.

In about 4th grade, the kids in my Christian elementary school began reading Left Behind. I never picked up the books myself; I remember a vague sense of confusion about how the authors knew the names of all the people in the future—even in the Bible, when the prophets made prophecies, they didn’t know the names of all the people in the future. I remember a sense of indignation and injustice that God might stop the world before I grew up. Someone said to me once, “Jesus is going to come back when no one on earth is expecting it.” So I spent my spare time thinking about Jesus’s return, trying to buy myself more time. (Let me clarify right here that Left Behind is fiction, and if you read Revelation you’ll notice there is no mention of rapture at all. Zero. It comes from a poor interpretation of 1 Thessalonians 4:17.)

Nicolas Cage = not actually in the Bible.

I got relatively little rapture theology—I call it theology with some trepidation—in my childhood. In sixth grade, one of my friends doodled “the end is near” on her science notes because it was almost the end of the class period, which was right before lunch. (Since then, I’ve been much more relaxed about the apocalypse.) The kids I work with now are steeped in the apocalyptic—not just Left Behind, but Divergent, The Hunger Games, Godzilla—and that’s just in 2014 box office releases. You can’t hardly go to the movies without the world ending. END_OF_DOCUMENT_TOKEN_TO_BE_REPLACED