There is a gap in Mennonite response to mass shootings. After a  shooting, when secular headlines buzz with gory details and harrowing survivals, Mennonite news outlets often continue posting business-as-usual news. Over the past few years, as shootings occur, I’ve begun Googling the location + “Anabaptist” or “Mennonite.” When I did it three days after the Sutherland Springs shooting, the first page of search results all read “Missing: Anabaptist.”

Occasionally, a Mennonite publication will carry a call to prayer or brief opinion that restates a general commitment to pacifism, but most often, we are left with the distinct, lonely feeling that pacifism means existing above the fray, and existing above the fray means pretending the violence didn’t happen.

A typical Google search after a mass shooting. (The second hit is a newspaper summarizing local headlines, which included coverage of the shooting on the same page where Anabaptists were given a nod during Reformation Day celebrations.)

Congregations in the same state or region may respond by attending a vigil, but often Anabaptist response is based on proximity and the coverage is a summary of the reactive response. It is not a proactive churchwide movement but a rippling in one corner of the fabric.

Days after the shooting in Las Vegas, Chicagoland Mennonite pastors met for our monthly pastors’ meeting. For months, we’d planned to have a speaker from Mennonite Central Committee facilitate a conversation about gun violence. Most of the pastors admitted we’d never talked with our congregations about gun violence. We didn’t know how.

Why are our pacifist pastors so ill-equipped to respond to what has become commonplace violence?

Every shooting demands not aloof pacifist whispers, but vocal pacifist witness. If a shooting happens in America and the pacifists have a moment of silence, does anyone hear them? Of course not. Our pacifism is a stale farce if it is never articulated to the broader culture. Just as we were vocal, visible conscientious objectors during the world wars, we ought to be conscientious objectors to the epidemic of gun violence. We ought to be at the forefront of proclaiming “this is wrong and it is sin.” We ought to be on the front pages of the Internet exclaiming, “If this is troubling to you, you are not the only one.” 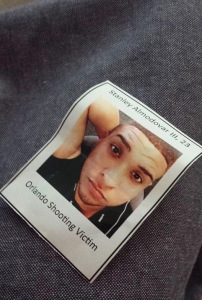 One of the prayer cards we used during a ritual of mourning for gun violence in June 2016.

And we ought to respond not just in public, but in worship, too. Perhaps we should make a commitment, as peace churches, to acknowledge and mourn every shooting. Every week that a shooting happens, we ought to begin our services all around the country by lighting candles for each victim, calling their memory into our worship recalling that each person was created by God and intended for peace and flourishing. We ought to open each service reading out loud together Matthew 5, from “Blessed are the poor in spirit” all the way to “if you greet only your own people, what are you doing more than others… be complete, therefore, as your heavenly Father is complete.”** We should repeat Matthew 5 until we memorize it, since it is the chapter we often say is the key to understanding the Christian life.

As I prepare for Sunday services the week after a shooting, I am often frustrated that we have no ritual of lament or prophetic call for peacemaking. It means that in my congregation, we simply don’t acknowledge the shooting. In four years, only once (after Pulse), did we include a ritual of mourning in our worship. I lament that I, as a pastor, have failed to teach my congregation to address gun violence as pacifists. In doing so, I have allowed my congregation to falter in their pacifism. I wish I was bold enough to arrive at church after the next shooting (there will be a next one) and declare a new ritual for these awful occasions—a ritual that affirms our call to peace, just as we regularly affirm our baptismal vows.Perhaps our call to worship should be an affirmation the posted “no conceal carry” sign on our door.

As a pacifist denomination, we ought to be among the first and the loudest voices proclaiming to be American does not mean owning a gun. That guns do not make us safer; what makes us safer is faith and hope and embrace of the neighbor.

It is not only pacifism that calls us to oppose gun violence. It is also the Anabaptist conviction to love our neighbor and our enemy. Who commits gun violence and mass shootings? Those with nothing to lose. Those who have lost a grasp on the sacredness of life and who feel unvalued, unvalidated, and utterly alone. If we are properly loving our neighbor, if we are properly reaching out and integrating the lonely and depressed and hurting neighbor, we are doing gun violence prevention. We are making our communities safer.

And we ought to remember a lesson from our own history of the Russian Mennonite migration to North and South America. In the early 20th century, Russian Mennonites hurried out of the country, persecuted by the Red and White armies as well as local militias. Mennonite communities were targeted for a reason: generations of good farming practice, strong communities, and mutual aid had created tight-knit, wealthy, well-fed communities, while Russian peasants across the region suffered and starved. In the name of being “in the world but not of the world,” the Mennonites ignored their neighbors’ suffering and built bigger fences. Our communities may be thriving and flush with peace, but if we cannot speak to the violence our neighbors’ experience, it will someday bleed into our own lives. And our own record of inaction will leave us ill-prepared to respond.

When the fray bursts with violence, we cannot be above it—we must be in it, among it, with it. But not of it.

*I’ve written a second piece on other ways churches can respond to gun violence, which will appear soon in the Gathering the Stones column at Mennonite World Review.

** Matthew 5:48 is more often translated “Be perfect, therefore, as your heavenly Father is perfect,” but the Greek word teleios is better represented as a sense of completeness or a finished, fully formed, mature thing.

One thought on “An Anabaptist Response to Gun Violence”