With regards to Future Church Summit, conventions in general, and whether or not Mennonite Church USA has any future relevant to anyone outside ourselves, I’ve come to a similar proverb: we won’t create a future we don’t love, we can’t love a future we can’t imagine, and we can’t imagine a future if we need to control it.

The Church–the big-C, institutional church–wants to control the future; and so it cannot imagine the future; and it cannot love the future. The church is so assured that it is the future, it is God’s divine will for the whole world, that it cannot embrace any future that contradicts its own self-centeredness. It doesn’t really believe that God works outside churches–outside institutions, even–and so the church’s primary orientation for the last 50 years has been fear. Fear of urbanization and fear of change and fear of changing sexual norms and fear of being found a fallible institution. The people who call Future Church Summit a first step, or the beginning of a process, are the ones who at some level grasp this reality.

I had hoped the Future Church Summit would be, if not life-changing, life-defining. I wanted Future Church Summit to be the moment that we–that the young people of the church–could stand above the dying institution, clapping our hands and shouting “We do believe in you!” until our imaginations resuscitated the pre-Constantinian Tinkerbell energy of our faith.

But like the hard work of environmental conservation, we have multiple ingrained views to dismantle and rebuild before we can thrive. We have to move from controlling, to imagining, to loving.

I arrived at Future Church ready to imagine it.

It’s possible that I mostly imagine the Future Church as a place where everyone understands the theological relevance of Hamilton.

But Future Church arrived ready to hold the long and soul-searching conversation about whether we could release control of our future. And we did. This was the first time in my memory that I’ve witnessed the institutional church–witnessed the conservative and moderate-conservatives who dominate our leadership–willingly release control. The planning team, maybe even the much-vilified Executive Board–spent months imaging a Future Church Summit they didn’t have to control. And we did. We promised to take seriously a document that confesses we can’t control the future. And we promised to try to imagine that future.

We didn’t even touch the idea of trying to love the future we imagine but don’t control. We might be years out from that kind of honest confession. But we moved down the right path. We stumbled away from our need to control. We didn’t always do it gracefully–we didn’t build enough places for conservatives to lament their loss of control, or enough places to hear them imagine a new place at the table they did not control.

Shout out to the moderates and conservatives doing the heavy lifting of re-framing conservative orientation to church dialogue.

We didn’t build in enough space, either, to take seriously the proposition that our delegate sessions are a sham democracy that fail to represent the church. The Saturday morning events–best identified by the technical term “hot mess”–sent us all into flashbacks of our worst church meetings. But we got through it. We got a document that we can take seriously, regardless of the conservative and rushed wordsmithing (which is what it was).

It doesn’t really matter, anyway, what shifted in the last half hour of the convention–many people had already left by that point, and the result remains theoretical. 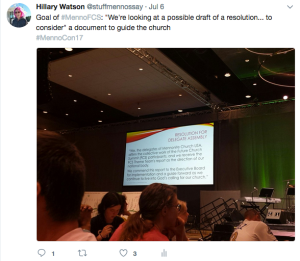 The best case scenario for Future Church Summit, from the get go, was “resolving… to consider….”

We’ve theoretically embraced the brainstorming, un-doing, releasing control, that Future Church Summit endorsed. The document is supposed to be authoritative to church boards and institutions but we know–we all know–that many of those institutions will be eager to water down or shelve the unkempt dreaming of the Future Church.

We know the real challenge is implementation. We know with track records like Executive Board’s bungled handling of the recent (non)appointment of a faithful gay Christian to a denominational committee, like Mennonite Mission Network’s reluctant transition of its long-time leadership, like Mennonite Central Committee’s firing of Wendi O’Neal, like Virginia Conference’s disingenuous handling of sexual abuse allegations, like the delegate body’s own convoluted approval of competing resolutions in Kansas City–we know how how much institutional resistance there is to “not controlling the future,” much less, learning to imagine and love it.

That is the distance we strive to go between now and the next convention. So that when we gather in 2019, we can boldly state that we don’t control the future–and because we don’t control it, we will be willing to risk imagining it, even if our imaginations never come to fruition. And in the years after that, we will be willing to believe that we can love the future, as much as, maybe even more than, we love the past.