Among the celebrities with whom I share an irrational sense of intimacy–Russell Wilson, Jonathan Toews, Chance the Rapper, Macklemore (we all have our flaws, okay?)–Lady Gaga comes closest to being a frenemy. She’s like a high school acquaintance who, you find out a decade later, is now dating your high school male BFF (with apologies for the heteronormative analogy). So I was surprised as anyone to find myself fawning over the release of “Joanne” this weekend.

In 2008, my 20-year-old self (always a lyricist at heart) was horrified at Gaga’s single, “Just Dance.” New to the dizziness of alcohol and straight-laced by nature, the thought of losing my phone and keys seemed dire enough to scare me sober from any level of drunkenness. I was astounded by the thought of a woman who could not see straight and still accepted another drink, believing she would get home safe at the end of the night.

After a few years of listening (and drinking, without major bodily harm), the song has grown on me. It sounds like the feel-good hit people always said it was. I attribute the brashness I first felt to the consequences of growing up in New York. Everything is less surprising in New York, I learned after three years working at a summer camp two hours outside the city. 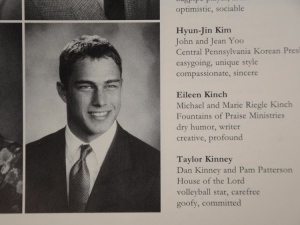 We were THIS CLOSE to a Mennonite superstar.

What brought Lady Gaga into my fantastical friendship circle, though, was not the repeated listening to a song that begins “red wine/Gaga.” Or the year of Mennonite Voluntary Service we spent singing “Alejandro,” even though most of us remained single for the entire year. It was the plot twist of 2011 when she began dating an alumni of Lancaster Mennonite High School. Taylor Kinney is not actually Mennonite (as far as I can verify). But because Lady Gaga dated him for five years and he is from Lancaster, I fully expect she (if not he) will make it into whatever equivalent of “The Chaunkah Song” Anabaptist Bestiary Project will someday write.

Which is to say: if you’re not listening to “Joanne” with an ear to Anabaptism and Lancaster County, you will not fully understand the album.

Which is to say: If you are Mennonite and not listening to “Joanne,” you’re only missing the future of the church. Gaga, who grew up attending all-girls Catholic school in New York City, is reconciling her faith in this album and practically begs the church to make room for her. And given all the tenuous circumstantial evidence, what Mennonite wouldn’t claim to have played a part in returning her faith?

Self-aggrandizing claims aside, “Joanne” is a faith album appended to a love album. How ironic that “Joanne,” the name of Gaga’s aunt who died young and whose anthem Gaga sings, is also Gaga’s middle name as well as the name of Kinney’s deceased grandmother. This album is Gaga reconciling that there is a world outside New York–physically, geographically, arboreally. There are country roads urban teens would have loved to take, and in that sense, Gaga is the bridge from Trump-cheering teens afraid of losing family farms to urban-raised hippies buying boutique organic plots for their CSAs in suburban Pennsylvania. Gaga is the bridge from rural America to a hope-filled future.

Pitchfork, among others, claimed the album was too toned down, not “Gaga” enough. It is less glitz and disregard for consequences. If you were hoping Gaga would be the next David Bowie or Prince for her entire life, it is a disappointment. She has shaken off the gender-ambiguous sequins and begun to go out in public without glitter on, headed for the wide open country. For those like myself, who thought “You and I” was a nod to her potential, her fearlessness of entering the narrative genres, “Joanne” is a dream come true.

For the first time, Gaga is speaking about faith, and somehow New York City Catholic schools created a gracious, high-life-living woman who wants to be part of a faith community.

The most gracious, gorgeous song on the album is “Angel Down,” where Lady Gaga envisions the brokenness of the church alongside her commitment to it.
“I confess I am lost
in the age of the social
On our knees, take a test
to be loving’ and grateful”
Gaga says the song is inspired by the death of Trayvon Martin, but with her history of LGBTQ activism, one can’t help but hear a call to inclusion in the song, too.
“I’m a believer, it’s a trial
Foolish and weaker, oh, oh, oh
I’d rather save an angel down”
Whatever the social event that the church is decades behind on–the death of young black men by police, legalization of gay marriage, endorsements of Donald Trump–Gaga’s words speak some kind of hope that young people will remain in the church and not be bigots.

Gaga isn’t interested in an isolated community of faith, though. She wants it integrated with the sensational and the most radical definition of “being yourself.” The extravagant, buoyant “Come to Mama” takes a surprising turn to the faithful:
“Dude in a lab coat and a man of God
Fought over prisms and a 40 day flood
Well, I say rainbows did more than they’ve ever done
So why do we gotta fight over ideas?
We’re talking the same old shit after all these years”
What more kindness can Gaga give us than to condemn equally the stubborn atheist and the short-sighted pastor? What more generosity can she give than to say the church isn’t wrong, just misguided?

The church doesn’t deserve the mercy we’ve gotten from music this year. God bless 2016, the year of secular artists from Chance to Gaga suggesting that Christianity maybe isn’t so bad.

Gaga has a more integrated faith than most of the Christians I know. It shines through her heartbreak (“Can’t you give me what I’m needin’, needin’/Every heartbreak makes it hard to keep the faith“) and her social lament (“Doesn’t everyone belong/in the arms of the sacred?”). Like the Dakota Access Pipeline activists, Gaga is convinced that positive social change will have a religious component.

Gaga digs into not only religion, but family, feminism, love with more robustness than electronica pop allows. Don’t be deceived by the bold line “young wild American/do you have a girlfriend” on Diamond Heart–the lifeblood of the song is “I might not be flawless but you know/I got a diamond heart,” a nod to Beyonce and the media’s obsession with simplifying the narrative of femininity. (Beyonce, too, showed some love for rural America in this year’s “Lemonade.”)

What if Lady Gaga is the closest we get to a unified United States?

A few months ago, as I mentioned feeling burnt out on activism, a friend said, “Yeah, even Lady Gaga seems to feel that. You know she’s really stepped back from her activism because it’s taken a toll?” I didn’t. Lady Gaga’s greatest gift to us is not her costumes and staged audacity, but her vulnerability, her turn to country music as still a home for genuine feeling. Gaga has already saved the weird kids in New York City; in this album, she brings an anthem to dying rural America, an encouragement to all those who thought the big city meant leaving your heart behind. Lady Gaga loves the country–loved it before Taylor Kinney–but only now has she given herself permission to create ballads as moving as dance hits.

And this, too, is Anabaptist. If “The Fame Monster” was the album for New York City, this is the album for the Lancaster, Pennsylvania teens, where churches are still claiming “straightness or hell.” Gaga and Kinney broke their engagement this summer, but perhaps this is the album she would have wedding-gifted to Taylor Kinney’s small-town family. Instead she’s given to us.

I will still be on the dance floor for every round of “Bad Romance.” But I’ll be in church at “Sinner’s Prayer,” I’ll be lighting All Saints’ candles to “Joanne,” I’ll be quoting “Angel Down” in denominational meetings. Lady Gaga gave us more than we deserved.

And if you’re young, Mennonite, and a man (or not), you best make your way to Lady Gaga’s presence and ask her to dinner.