“Amazon Prime is the devil,” I said to a friend this week. The poor friend, the son of a preacher, was confused by my vehement rebuke, since Amazon Prime was only tangential to the story he was telling.

As a pastor, I try not to go around calling things the devil just because I dislike them. But if Amazon Prime isn’t the devil, it’s certainly something close to it. It amazes me how quickly Christians latched on to Amazon Prime as if their freshly arrived toilet paper is heaven-sent. How quickly we’ve let Amazon be our source not only for products, but invited Amazon to take over the whole supply chain, edging out competitors and creating functional monopolies on more and more products. How quickly we’ve bought into the idea that faster is better.

I waited three days for Jesus to resurrect; surely I can wait three days for my toilet paper (or at least, use my roommate’s bathroom until it arrives; although I should apologize to my roommate that I went through almost a whole roll of her toilet paper before I found the time to get my own; sorry, Stacy). Amazon Prime is not quite the devil. But it certainly approaches idolatry, as we worship the deity of convenience, the deity of avoiding human interaction, the deity of individualism and entitlement and instant gratification.

My church got an Amazon Prime membership–against my principled and idealistic protests–several months ago. I was horrified when packages began arriving on Sunday morning, delivery men walking into church as the service began and wondering where to leave our new shipment of Post-It notes. God damn, I thought, how can we justify this? Running our community now relies not only on outsiders not being invited in, but outsiders being asked to supply our needs instead of join our assembly. How can we possibly think of ourselves as evangelical when we worship the service economy that keeps a whole class of people working on Sunday mornings so that we can worship in comfort, with our Starbucks and our Post-It notes?

We reset our deliveries so that Amazon stopped bringing us packages during the service–but I remain astounded by how complacent the church is as capitalism’s demands expand across our lives.

Among Mennonites, in particular, I have a deep ambivalence for Ten Thousand Villages. I owe many childhood memories to the fair-trade organization. I will always associate the coming of Christmas with the smell of warm Pfeffernusse roasting in the church kitchen while I unpack boxes of fair-trade ornaments for the church’s annual sale. I remember so many boxes, from dolls to jewelry, under my own Christmas tree, from the store we faithfully served. As a teenager, I volunteered at the Ten Thousand Villages two blocks down from y high school. I still can’t resist the urge, when I am traveling through a new city, to walk into the store full of warm-hued walls and color-coordinated displays, fingering smooth items and breathing deep the smell of my childhood. I have a deep, emotional loyalty to Ten Thousand Villages. 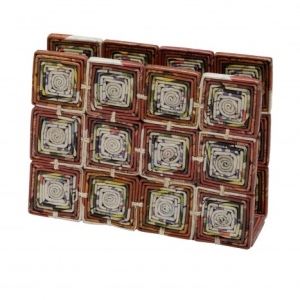 At the same time, the oftener I go into the stores, the less I desire to purchase. I have no urge to own a mouse-shaped cheese knife or matching napkin holders. I’m a minimalist bachelorette at home, spurning any suggestions of “more” in my roomy house. Someone said to me, once, cynically, “Ten Thousand Villages subsists on wedding registries,” that ode to unified capitalism and the great materialistic settling down of life.  Weddings are lovely; most everyone I know who’s gotten one seems quite delighted to have it. I’ve even bought wedding gifts from Ten Thousand Villages.

And yet… herein lies my ambivalence about Ten Thousand Villages. It still relies on global capitalism as the solution to justice. (this is the same concern I have about MEDA, but that’s a post for another day). It relies on some palliative corrective, as if free trade properly medicated can bring the kingdom of God. It relies on a commitment to global movement of goods, without asking the environmental cost of shipping around the world. It relies on the dispensable income of the wealthy, adding a sort of fair-trade tax to accelerate the trickle down principles. Ten Thousand Villages needs a new economic model–one based on essentials, not upscale home decor. To pursue functional upcycling, not decorative reuse. Ten Thousand Villages, as a business, is facing the same institutional struggles as the denomination writ large.

This spring, I made the teenagers at my church chart out the cost of buying different items fair trade and conventionally produced: bananas, jeans, chocolate, coffee; a price difference of just a few cents to more than quadruple. In their discussion, they concluded, “You can’t possibly buy fair trade all the time–it’s too expensive.” They, too, are pragmatists.

One spoke up, saying, “Maybe if we just bought less stuff? Then we could buy fair trade more often?”

And isn’t this the paradox of Ten Thousand Villages? That it still relies on buying more stuff as a solution to economic inequality? That it relies on the global dependency of markets, inducing the wealthy to pay artisans across the globe so that they can stay in a quasi-indentured state, producing goods for our perpetual consumption? Isn’t a better solution that we all have less of a sense of private property, more of a sense of shared goods, that artisans sell to the communities of which they are a part? That instead of buying coffee from Vietnam we buy Menno Tea from the small farm in Bird-in-Hand, Pennsylvania? That in caring for those near at hand we throw a small stone in the water, creating concentric circles of economic impact, justice begetting justice from the local to the global?

Of course, this is all very nice in theory, as I sip coffee from a disposable cup in an air conditioned cafe. I console myself that at least I tipped moderately well; at least I am at the local shop instead of the Starbucks at the end of the block; at least this morning I celebrated my birthday breakfast at a locally-sourced cafe; that the process of becoming is, after all, a process.

As a pastor, I do not try to manufacture controversy. What I do try to do, which sometimes resembles manufactured controversy, is hold up the objects in our daily life and say, “Is this an object or is it an idol?” I worry that the church is full of sacred cows; that a life unexamined is a life complacent; that the desire for simplicity can itself become an idol, a plea for ignorance, because if sin means one thing it means that nothing in life is simple.

Faith is economic. Jesus was an economist, offering an economic model of agrarian abundance based on dissolving the fiction and sin of private property. If we are living in the world but not of the world, it means we are overlaying the economics of the cross on the economics of capitalism. It means we must have these conversations.

This is part one of two; the second post will appear in the coming weeks in the Mennonite World Review, and be reposted here.