And what about gun violence? Can we fix it? Can we fix America’s gun problem? Over and over, after shooting and shooting and shooting, people in the news have said “we need to stop this thing before it becomes normal.” It isn’t normal, still, not yet, there is still outrage and indignation everywhere–there are even still politicians offering “thoughts and prayers.” Mass shootings haven’t become normal. But they’ve become stories. I’m not a future-teller, but I know some things about stories.

People are creatures of habit, but we’re also creatures of story. And there’s a story about a man, he is probably white, and maybe he is young, maybe he is old, he is sad and he is lonely but mostly he is angry, and he wishes for recognition, to do something in the world that will mean something, even if it means something bad, and he sees a place, he knows a place, he goes to the store and he buys a gun and then he buys some bullets or maybe another gun, and this is a story. It’s the story of Colorado Springs and Charleston, South Carolina and of Umpqua Community College and of Sandy Hook.

This week, there’s been some debate about how many mass shootings there have been in the U.S. this year. It’s hairsplitting. The low statistics–the ones that say there have been ten mass shootings in the last two years–those statistics rely on the idea that some shootings are exceptional and some are “ordinary.” Some shootings are truly “random” and some are predictable violence, and all our energy should go to prevention the truly random shootings. Statistics anyway don’t ultimately matter–violence doesn’t happen in statistics. it happens in stories.

We are storied creatures. As long as we have a story, about a mentally ill man with too much time and not enough hope, as long as there’s a coherent narrative to wrap around violence, we don’t need to normalize it. We don’t need to normalize it because we can explain the abnormality. The problem of mass shootings is tied to the problem of stories with pre-scripted endings. A man looks around the country and says “hey, I fit this criteria, I suppose I had better finish out my story so it looks like this one.”

To that end, statistics are irrelevant. They’re abstract. Stories are important.

Preventing mass shootings is a concern of legislation and social safety nets, even income inequality. But it’s also a matter of being better story tellers. All legislation comes from a story. Social safety nets come from a story that tells us caring for the most vulnerable is a way of caring for the most important people in our world. Can we find a story for sad and angry white men that doesn’t amount to murder? Can we create narratives in which he instead goes out and gives away all his money and befriends a homeless man who tells him life is worth living? Can we create a story in which the would-be-shooter goes to the school and lies down on the doorstep until someone asks him what’s wrong? Can we create a story where sad white men learn how to be woodworkers or walk the Appalachian Trail until they find meaning or apprentice themselves to a master blackbelt until they learn to defeat the bullies around them? 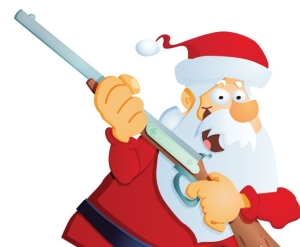 Perhaps that’s a bit abstract. There are stories–ones that have never had anything to do with guns–that we must protect from being co-opted. Whatever else we do, whatever else happens–we can’t give Santa a gun. There’s been some news recently about billboards and advertisements where Santa becomes a bearer of firearms. Santa is an old white man and he’s clearly is angry if he’s withholding presents from children–but just because he fits the basic criteria, he is not bound to that story. Don’t give that guy a gun. Give him a purpose and a support network and reindeer who affirm him. Santa is an angry white guy who has found some other meaning in his life. For the angry, for the frustrated and the grudging, Santa holes up in his cottage and gets depressed that no one needs him in July, but still he finds meaning in his work.

We need all the tools we’ve got to make progress on gun violence. If you are a construction worker, construct peace. If you are a teacher, teach anger management. And if you are a meaning-maker or religious leader, as I am, we will make stories. We will weave stories without guns, until our stories come true. But all of us, in all our professions, we are story tellers–let’s be careful which stories we tell. Humans have a strong impulse to life. This living thing, it’s something worth doing. Let’s tell stories that make it easier to choose life. 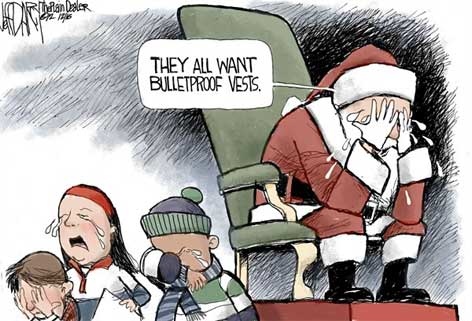