We need to find a new way to talk about the congregations that are leaving MC USA. They’re not leaving us; we’re getting divorced. Leaving is something you do after four OK Cupid dates. We have shared assets. We have children together (MCC, MMN, Everence) and we have the same parent (MWC). Do you want to stay involved in your children’s lives? Do you want to stay connected to your ex-in laws? How will you negotiate custody on holidays like Relief Sale and Schmeckfest? Churches aren’t “leaving”–they’re moving out of the house we’ve shared for 60 years.

This metaphor is scary. The church is still, though sometimes only technically, opposed to divorce. How can we talk about “divorcing well” if it’s something we’re not supposed to do at all? If what Clinton Frame actually did was divorce Indiana-Michigan, then both parties need a moment of self-reflection, self-discovery, and learning how to live separately. Self-reflection is hard, but what I’ve noticed recently is how much churches are struggling to live separately.

There are many churches out there singing Tracy Chapman and walking as slowly as they can. They keep holding out for Kansas City convention, like it will give them one reason to stay here and they can turn right back around. If you’re the sort of church demanding discipline for Mountain States, Kansas City won’t make you change your mind. The church is simply too divided, too opinionated, and too diverse to agree on punishing a conference–a conference that includes, by the way, some churches that disagree about homosexuality.

I’m not targeting conservative churches here–if there are liberal churches who plan to walk out of MC USA, this applies to them, too. I just don’t know any of those congregations (if you’re out there, holla at me). But it seems some congregations are out there, trying to take away their cake and eat it, too. (Aside: because the regional Mennonite bodies are called conferences, I’m referring to them as conferences, and to their annual meetings as assemblies; some conferences may have other names for their gatherings.)

“The attendance rolls showed that some of the more conservative churches had brought along as many delegates as they were allowed—even churches whose members usually didn’t show up to conference meetings.”

This points to a bigger problem in the denomination, that some churches don’t engage in their annual assemblies and therefore, are alienated from congregations in the conference that are different from them, and therefore, are more inclined to ridicule than to build relationships–but that’s a different issue. There are congregations who are on their way out the door who are stretching out their goodbye.

Glade Mennonite Church voted to withdraw from Allegheny in January. Yes, they should attend the Allegheny assembly meeting and say goodbye to their friends (or acquaintances). But no, they should not vote on conference budgets or engage in discussion about future plans or vote on whether or not to reinstate Hyattsville. If you’re divorced, you need to stop messing with your ex’s finances. That ain’t healthy. I don’t know if Glade did vote, but if they did, that’s an unhealthy exit. It’s not fair to Glade’s future, and it’s not fair to Allegheny. You’re singing Beyonce and Iggy Azalea at the same time. Stop. It’s time to call Tyrone (if that reference means nothing to you, you’re probably Mennonite).

This isn’t just an issue for Allegheny. I’ve heard about it happening in Ohio Conference, although I wasn’t at their annual assembly last weekend. And I see it happening in Illinois Conference. Congregations who are upset about women in ministry digging in their heels on GLBTQ issues. Look: if you’re concerned about women in ministry, you probably should leave MC USA or accept that you’re at variance with the Mennonite Polity for Ministerial Leadership. There are congregations promising to leave, but dragging out the divorce as long as they can. They’re singing “If I Fall, You’re Going Down with Me“–and half of them don’t even like the Dixie Chicks!

To be clear: this is a small minority of churches. The much larger plurality of moderate and conservative churches are still making up their minds, still practicing discernment and wondering what God is calling them to in the wide mess between the extremes. To those churches I say: let’s talk. Let’s sit down at convention and complain about the food and get to know each other and figure out if we can do this complicated thing called church together. It could be a forever kind of conversation or we might go down in flames. But I’ve got blank spaces all over my convention schedule, and I’d love to write your name.

For the most conservative block–I don’t mean that disparagingly, you are simply the ones most certain that God is not calling you to stay in this relationship. You’ve been so injured that leaving is what you need to do to heal. To those congregations–if you’ve done your best to proclaim the gospel to the churches you think have misunderstood it, if you’ve tried to cure the sick, cleanse the leapers, and cast out demons, and if you’ve found the denomination unresponsive: don’t stand in the doorway watching what your ex-love go about her life without you. Leave the town and shake the dust off your feet as you go. Get that dirt of your shoulder. Jesus said something like that. So did Taylor Swift. So shake us off–and keep that song. I never liked it much, anyway. 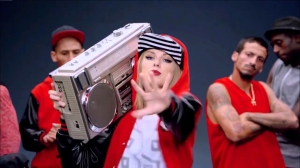 It’s cool, shake off the denomination. Maybe once we clear the air, we can shake off our cultural appropriation, too.