“The black experience is the feeling one has when attacking the enemy of black humanity by throwing a Molotov cocktail into a white-owned building and watching it go up in flames. We know, of course, that getting rid of evil takes something more than burning down buildings, but one must start somewhere.”
-James Cone, A Black Theology of Liberation 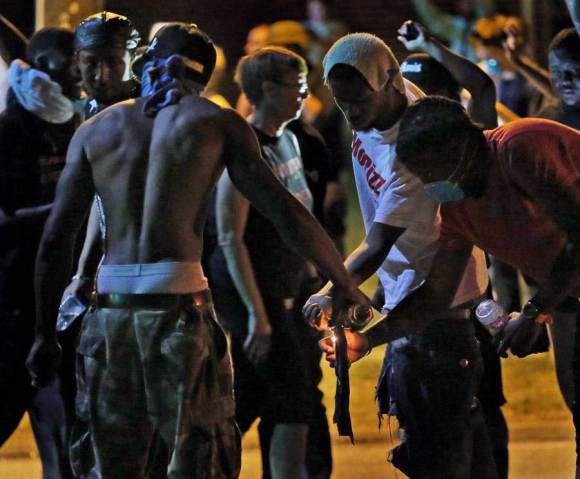 When I saw the images of violence in Ferguson, especially the photo from August of black men gathering to light a Molotov cocktail, I thought of James Cone’s quote above (note: I couldn’t find a photo credit for the image; if you can source it, let me know). I read James Cone as a 17-year-old, in a Liberation Theology course taught by a pacifist professor at a pacifist college. I remember the quote now because we were shocked as students–who the hell says “burning buildings feels good, but let’s do more”? I believe in nonviolence, still. I pastor at a Mennonite Church, a historic peace tradition that has always claimed pacifism. But I wondered, as I turned over the image and the quote in my mind: What can I, as a pacifist, say about violence in Ferguson?

Let’s start with a simpler question. What about violence? Mia McKenzie observed how the media in Ferguson has distorted our idea of violence. Reflecting on the looting that happened after the Grand Jury announcement, she wrote:

“whatever you think of looting, it isn’t violence…. Violence is something that living beings experience. People and animals experience and inflict violence against other people and animals. The violence that’s inflicted on us has an impact on our bodies, minds, spirits. Buildings don’t have bodies, minds, or spirits. Buildings can neither inflict nor experience violence. That’s why stealing a TV from a Walmart isn’t the same as taking a human life. Whatever it is, it isn’t violence. And if you really believed that Black people are fully human, you wouldn’t be equating our lives with your things.”

Reaction to the Grand Jury in Staten Island was almost exclusively peaceful. But if it hadn’t been, what would we have said? Would we have accused them of “unnecessary violence”? What we call violence is culturally formed. I don’t entirely agree with Mackenzie, though. What if the thing being looted is food? What if the business that burned was a family business that will take years to repair? But “what if” is not the point. The point is that we don’t call police manslaughter violence. We call it an accident. Dear pacifists, how are we going to be peacemakers when we can’t even call violence for what it is? We are the ones Ezekiel condemned for saying “peace, peace,” when there is no peace.

What I mean is, Martin Luther King Jr. was right when he said, “the Negro’s great stumbling block in his stride toward freedom is not the White Citizen’s Counciler or the Ku Klux Klanner, but the white moderate, who is more devoted to ‘order’ than to justice; who prefers a negative peace which is the absence of tension to a positive peace which is the presence of justice; who constantly says: ‘I agree with you in the goal you seek, but I cannot agree with your methods of direct action’; who paternalistically believes he can set the timetable for another man’s freedom.” Mennonites make some damn good white moderates. Here’s James Cone again:

“The white Christian response to the riots in Detroit in 1967 was to say, ‘We deplore the riots but sympathize with the reasons for the riots.’ This was tantamount to saying: ‘Of course we raped your women, lynched your men, and ghettoized the minds of your children and you have a right to be upset; but that is no reason for you to burn our buildings. If you people keep acting like that, we will never give you your freedom.'”

In high school, I met two boys from Calvary Community Church in Hampton, VA. C3, as it’s called, is the largest black congregation in Mennonite Church USA. Hampton is a military town, and many of the church members are in the military; they raise their children to be proud of a military career and encourage armed service.

What does it mean to be a Mennonite here?

I was horrified when I heard that. “Don’t they know about pacifism? How can they be Mennonite and still send their children into the military?” A professor of peace theology replied, “Your pacifism is a privilege. If you’re poor, college is expensive, and it’s either the streets or military–the military is the best thing you can do for your community and your family.”

White Mennonites often forget that. We think we can “opt out” of the military industrial system by not doing things. Many of us went to college because there’s always some other poor, desperate kid who will join the military. There’s no Mennonite fund for youth of color who want to do voluntary service; we’re not out there meeting youth in Hampton with four-year scholarships to study Peace & Conflict Studies. So who are we to accuse them of violence? Who are we to call ourselves pacifist?

There’s a class called Violence and Nonviolence at my old Mennonite college. We called it “Violence and Non” for short. Like “non” is the opposite of violence–just “not doing.” But no, nonviolence is an action, a doing of things. You can’t accuse people in Ferguson of “being violent” when you’re not “being nonviolent.” You’re complicit–we’re complicit.

Pacifists–peacemakers–we chose the hard path. We live in a culture of violence. Any act of peacemaking is an uphill battle. In the wake of Ferguson’s riots, I wanted to defend pacifism, I wanted to argue that nonviolence is still the best way to bring social change. But over and over, as I read the headlines, all I could think was: prove it. Prove it.

This is a call for Mennonites to prove it. Prove that nonviolence works. Nonviolence is not an individual choice. It’s a system of living in Shalom. To paraphrase James Cone: throwing a peace march may feel good, but getting rid of evil takes more than choosing not to do it.

One thought on “Violence and Non: Police Brutality and the Pacifists”