In about 4th grade, the kids in my Christian elementary school began reading Left Behind. I never picked up the books myself; I remember a vague sense of confusion about how the authors knew the names of all the people in the future—even in the Bible, when the prophets made prophecies, they didn’t know the names of all the people in the future. I remember a sense of indignation and injustice that God might stop the world before I grew up. Someone said to me once, “Jesus is going to come back when no one on earth is expecting it.” So I spent my spare time thinking about Jesus’s return, trying to buy myself more time. (Let me clarify right here that Left Behind is fiction, and if you read Revelation you’ll notice there is no mention of rapture at all. Zero. It comes from a poor interpretation of 1 Thessalonians 4:17.) 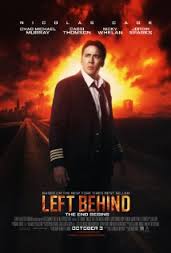 Nicolas Cage = not actually in the Bible.

I got relatively little rapture theology—I call it theology with some trepidation—in my childhood. In sixth grade, one of my friends doodled “the end is near” on her science notes because it was almost the end of the class period, which was right before lunch. (Since then, I’ve been much more relaxed about the apocalypse.) The kids I work with now are steeped in the apocalyptic—not just Left Behind, but Divergent, The Hunger Games, Godzilla—and that’s just in 2014 box office releases. You can’t hardly go to the movies without the world ending.

There are so many misconceptions about Revelation I really can’t put them all in one blog post. (I thought about titling this one “The Revelation is, You’re Not Reading the Bible, Idiot,” but that didn’t seem very pastoral.) Maybe I’ll make it a series: 2012 and Other Years the World Did Not End. Anyway. I preached on Revelation 11:16-18 and 21:1-5 this weekend, but here’s one of the interesting bits that didn’t make it into the sermon.

Look at the end of the WORLD. But which one? Revelation uses three different words for “world,” as Barbara Rossing points out. The first is ge (γῆ). This means the earth itself, the dirt of it; the arable land; the land (as opposed to the sea); the earth itself. Revelation, and the New Testament, is pretty positive about the ge. God loves the ge; in Revelation 21, God creates a new ge where God can dwell with the people and be among them. The second word is kosmos (κόσμος), which has a range of meanings from “the inhabitants of earth” to “the universe” to “an apt and harmonious arrangement or constitution, government” to “the ungodly multitude; the whole mass of men alienated from God.” Sometimes the kosmos is a negative thing in Revelation, but it is still, like the ge, created by God.

The final word is oikoumene (οἰκουμένη). This meant, during the time Revelation was written, the whole Roman Empire; the inhabited earth; the way of life as it was lived in Rome—with all its slavery, sexual abuse, war, violence, and capricious gods who willed conquered people to fuel the engines of Empire. Call it Babylon or Empire or white flight or plantation life—it was a lifestyle that benefited a few people quite a bit, but came at the cost of hurting many others. This was especially true of Jews and Christians—they were not popular people in Rome. There are no positive references to the oikoumene, not in Revelation and not in the Gospels. Revelation wants the end of the oikoumene.

Look at that. It’s almost like the New Testament has a coherent trajectory about God and grace. Who knew.

One thought on “The End of Which World?”